skip to main | skip to sidebar

I have started a new mailing list focused on investing in Paete. Please visit and join.
Posted by TonyB at 10:17 AM No comments:

One cannot fathom the possibility of changing the society to accept atheism if one is not known to be one in his own immediate environment - friends, family, and even neighbors. If you are not an out-of-the-closet atheist, you cannot appreciate the changes in people's perception when they are confronted with the real thing. To most Pinoys, a non-believer is an unimaginable being but here I am and I am real. And more, I belong to a growing community. They cannot dismiss us if we have a case. If we can argue well our position, we can either gain respect or get derision. Personally I'd prefer respect but I can also take derision if that's the price of being intellectually honest to myself. In the end, one ends up in one hand real friends who will respect your views despite the vast difference because they saw beyond your atheism, and on the other hand may lose superficial friends. I think religious differences, which I take to include non-religion, in matters of personal relationships should take a backseat but if the other party cannot do that, it will surely result in rough roads ahead that can also mean separating. It's gotta be painful if he/she is a very close friend or family but I wouldn't know since so far I have been in good terms with all of them.
Posted by TonyB at 12:01 AM 1 comment:

We are currently in the process of putting up a website to support the consolidated Reproductive Health Care Act now filed in the 14th Congress. Once it's setup, we'll let everybody know. Please keep yourself informed by reading the bills yourself first-hand and maybe you can write your congressman to express your support for this very important but still pending legislation.

cheers!
TonyB
Posted by TonyB at 12:53 AM No comments:

We the undersigned express our support of HB 4110, The Reproductive Health Care Act.

We fully support the bill’s principles as laid out in Section 2.

We all hope for a healthy Filipino society. We believe the bill will help us build such a society where reproductive health care is available to anyone and everyone, free of discrimination on age, gender, sexual orientation, marital status, and religious affiliation or non-affiliation. Where policies concerning reproductive health care that affects everyone is not dictated by any particular religion or belief system. We believe in the right to choose one’s method of planning a family and spacing children, or to choose to have no children at all. The rights of the individual to choose according to his conscience don’t fall under the aegis of self-proclaimed moral authorities of the religious establishment.

The Philippines is a nation of diverse religious beliefs/non-beliefs. No single belief system represents the whole diversity of Filipino religious and non-religious thought or belief nor does any of its leaders speak for all its adherents. The continued opposition by the leaders of certain sects is a clear encroachment on the rights to free choice on reproductive health methods and services of every Filipino, and trample on the rights of those who do not adhere to their beliefs. We strongly condemn the negative campaign being waged by these leaders to mislead its adherents by misrepresenting the bill’s content, and by resorting to using dogmatic, unscientific, and outmoded beliefs to support its arguments.

We strongly support the legislation because we believe this is for the well-being our nation in particular and humanity in general as we face the future of a planet with limited resources.

I always receive invitations to join this social networking site and I always refuse. Friendster is for keeping in touch with your friends. I have been using my Yahoo! email (and messenger) account ten years now. If I would like to be in touch, I think it's enough. Those who know my email address already know how to get in touch - no need for Friendster. In some cases, I maintain or join Yahoo! mailing lists. Currently, I maintain mailing lists for my college barkada, my high school friends, my IRC friends, and my family. I am also a member of a few communities I feel strongly wtih, my town folks and the community of Filipino freethinkers and atheists. So next time I refuse to join your friend network in one of the social networking sites, it doesn't mean I am refusing to renew or maintain our communications. You have always known my contact detail. I can be reached there any time. I check my emails regularly.
Posted by TonyB at 2:31 AM No comments: 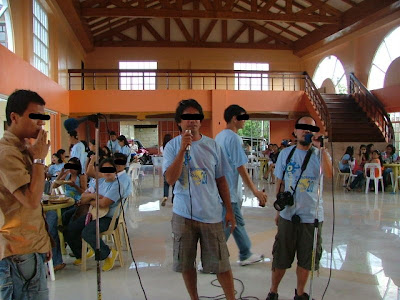 The Liceo De Paete class of 1989 held their class reunion last 23rd March. It was well-attended and was a lot of fun. One of the highlights of the event was when everybody sang, tuned, hummed the class theme song. LOL. Everybody was signing and swaying to the tune but nobody was watching except the few friends and family taking pictures. Mga opitahal talaga. Pictured above is one of the karaoke moments. Congratulations to our tireless ex-president S. B. for a job well done!
Posted by TonyB at 12:08 AM 1 comment:

How Myths Are Made 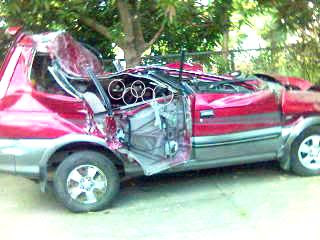 This is how myths and urban legends are started. Somebody with a creative bent and imaginative mind sees things in an otherwise just an ordinary snapshot (above), like the toasted bread that's supposed to show the image of Virgin Mary sold on eBay and bought by a casino supposedly because it has become a part of pop culture, this time it's supposedly the faces of five teenagers from Paete who perished in an accident in Famy, Laguna the other day. It's a cheap shot.

Regarding the accident, the driver was asking for forgiveness in what happened. Well and good but that should not get him off the hook.
Posted by TonyB at 10:31 PM No comments: